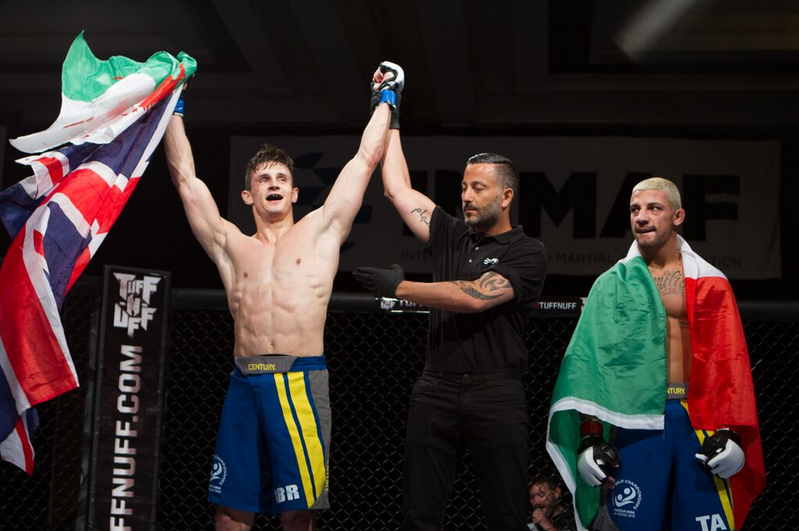 It’s been a long and rocky road for top Welsh MMA prospect Josh Ellis. It’s been more than 18 months since the former IMMAF world amateur champion picked up Gold for the UK national team at the 2015 IMMAF World Championships in Las Vegas, however, the 25-year-old’s eagerly awaited pro debut is finally upon us, taking place on the main card of Cage Warriors Wales in the city of Newport this weekend, March 3. “I’m Really excited to make my Pro Debut,” Ellis told IMMAF.org. “I’m lucky enough to make my debut in Wales and bring a lot of support with me. Big bonus also to make it on a well established show like Cage Warriors.” The MAT Academy product will take on undefeated Polish competitor Daniel Hodor (2-0) at 155lbs; Ellis remains a 155lb competitor following his IMMAF World Championships triumph in 2015. Ellis bested 4 opponents in the space of 5 days to win the Men’s Lightweight bracket, defeating opposition from Bulgaria, Austria, Italy and Finland, including 2016 European Open champion Ferdun Osmanov, plus Bogdan Grad, Davide Gregorio La Torre and Tuukka Repo. However, the momentum was derailed soon after by the impact of a hand injury that was made all the more hellish due to recurring breaks. “I haven’t competed for a while, not since winning Gold at the IMMAF World championships in 2015. One of the biggest reasons for being out of action would be breaking my hand in September 2015, shortly after the World Championships. It was re-broke/moulded a couple of times and I spent 2 months in a cast. The muscles, nerves etc are very fragile afterwards. Rehabbing it and getting movement and strength took a lot longer than I expected. Also, the bone itself felt weak during sparring at times, so it takes a good 6 months to be confident in throwing strikes properly. “Other than this, I spent 2 months travelling around to Thailand and Vietnam. Mainly to chill and just ge;t out and see other parts of the world, but I was able to train quite frequently with the amount Muay Thai gyms out there.” The mental anguish of being forced out of action was forever present, but the motivation remained and Ellis feels confident in picking up from where he left off. As the fight camp kicked off heading towards a pro debut on home soil, and with injury distractions behind him, Ellis described his eagerness for development as ‘compulsive’. “It was difficult not fighting. Especially when I injured my hand and had all the hype from winning the World Championships. As soon as the cast came off I was very motivated to just get back into training. Since then I’ve made some huge improvements to my striking and other elements of my game during my time off. “Training for this fight has been going really well. I always train consistently when not competing. It’s a great time to learn and play with new moves/techniques. Then, during fight camp, everything is a lot more organised. I get quite compulsive about getting rounds done whether they are MMA, boxing, Muay Thai or grappling rounds. I’m always looking to make improvements in all aspects of fighting. “Everything has gone great for this fight camp. I’ve prioritised drilling, sparring and pad-work whilst making sure my strength & conditioning sessions have involved specific movements to improve my speed, power and muscle endurance. Props to Frank Taggart Fitness.” The effect of a 20-month momentum drought can be devastating to the career of any fighter, dealing a knock not only to development in the gym, but also the potential for big opportunities, let alone that of an 0-0 ;hopeful whose hype as a top amateur standout was snatched from him. Nevertheless, Ellis is confident that the prestige of his credentials as an IMMAF world champion remain prominent, enabling him to stand tall and be taken on by Cage Warriors Fighting Championships, one of the biggest and most respected promotions in all of Europe and a leading exporter of UFC talent. “Definitely, the IMMAF has great exposure and following. The tournament format doesn’t allow any hiding, you face the toughest amateurs from other countries resulting in a very legit and respectable title. Promoters, fighters etc, are all aware of the IMMAF so it will most definitely help me climb the ladder quicker. Most importantly, I need to be more active. Winning and finishing fights frequently along with my previous achievements will definitely get me where I want to be.”

In recent months the UFC has taken on an influx of leading Welsh talent in the form of Brett Johns, Jack Marshman and most recently John Phillips. The trio’s impact has sparked tremendous national support and Ellis aspires to join his countryman in the top flight of MMA within the next 2 year. “It’s great to see Brett, John and Jack in the UFC. The support from the fans and media is awesome. It goes to show the popularity of MMA in Wales is growing. As a nation, Wales gets behind all of our national teams, so the Welsh fans could defiantly be compared too the Irish. “The UFC is the place to be. I’m training hard every week, putting the time and effort in. I’m 25 now and would like to get the phone call by the time I’m 27.” Competing this weekend at the Newport Centre, Ellis will be joined on the Cage Warriors Wales main card by fellow Welshman and Team UK alumni Jack Shore. Shore capped off his own undefeated amateur career at 12-0 by claiming Gold at the 2015 IMMAF European Open and turned in March of last year. The Featherweight contender is currently 3-0 as a professional with two victories under the Cage Warriors banner. By IMMAF.org lead writer and website manager, Jorden Curran